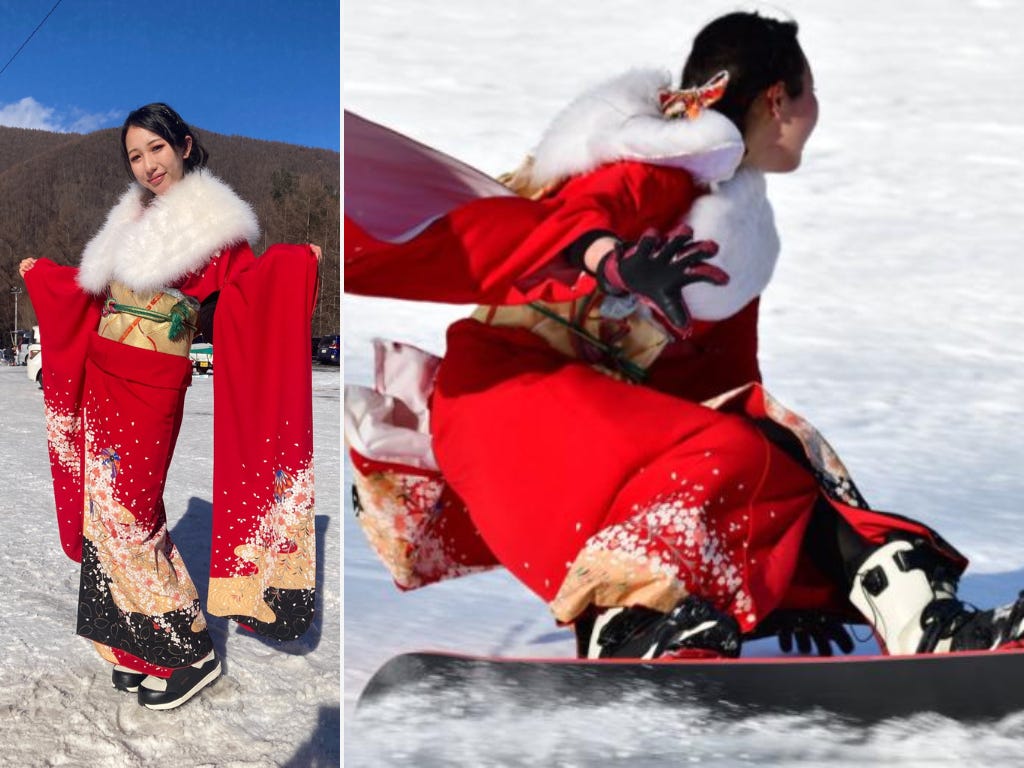 The internet is going wild for a video of a young Japanese woman snowboarding in a red kimono. A 20-second clip she posted on January 9 has already been viewed more than 5 million times.

Sumire Morino, 20, told Insider that in the video she is wearing a furisode kimono she bought for 20,000 Japanese yen, or $153. The furisode is worn by single women in formal settings. The term refers to the long “swinging sleeves” of the outfit.

“In Japan, there is a culture of women wearing a special long-sleeved kimono, the furisode, for the coming-of-age ceremony, and I wanted to wear one at least once,” Morino said.

Coming of Age Day is a public holiday in Japan held to celebrate teenagers who turn 20 as they enter the next phase of their lives: adulthood. But Morino told Insider she didn’t want to take part in a traditional ceremony that would involve meeting all of her elementary, middle and high school classmates.

Instead, Morino opted to go to Banshogahara Ski Resort in Nagano to celebrate, combining his high school hobby of snowboarding with a slice of tradition.

Morino – now a student in Kyoto specializing in traditional Japanese craftsmanship – told Insider that she was initially worried that the long furisode sleeves would get caught under the snowboard. But her worries were for nothing, as evidenced by the video of her hurtling down the slopes, long sleeves flying in the winter wind.

“The kimono suits you so well! Congratulations, you have become an adult”, read a comment on Morino’s video.

Morino also posted photos of herself wearing the kimono on the slopes and on a ski lift. She told Insider that she had to readjust the outfit several times because the wind was blowing “very violently” and ruining her outfit.

“For me, coming-of-age day was just an ordinary day,” Morino said. “But a lot of people celebrated with me and it became a very memorable day.”

At least one million people celebrated Coming of Age Day this year on January 9. Putting on new “adult” clothes to mark a rite of passage is thought to date back to the eighth century.

Women often wear furisodes kimonos on coming of age, while men often wear suits or pleated hakama pants. Young Japanese are often seen with family and friends visiting temples to ask for blessings or participate in seijinshiki, ceremonies held at local town halls. It’s also the first day that many young people are legally allowed to drink and smoke, so the festivities can get rowdy.

Morino is not the only youngster in Japan to have found a modern way to celebrate the day of tradition.

Two girls from the Japanese city of Shizuoka have recreated a viral photo of themselves in school uniform with Mount Fuji in the background. But this time the duo were older – and celebrating coming of age together.

In Kita-Kyushu, some young people opted for showy, non-traditional outfits to mark the day with their friends – a rare sight in Japan, but one that has become something of a local tradition.

The next Coming of Age Day will be celebrated on January 8, 2024.