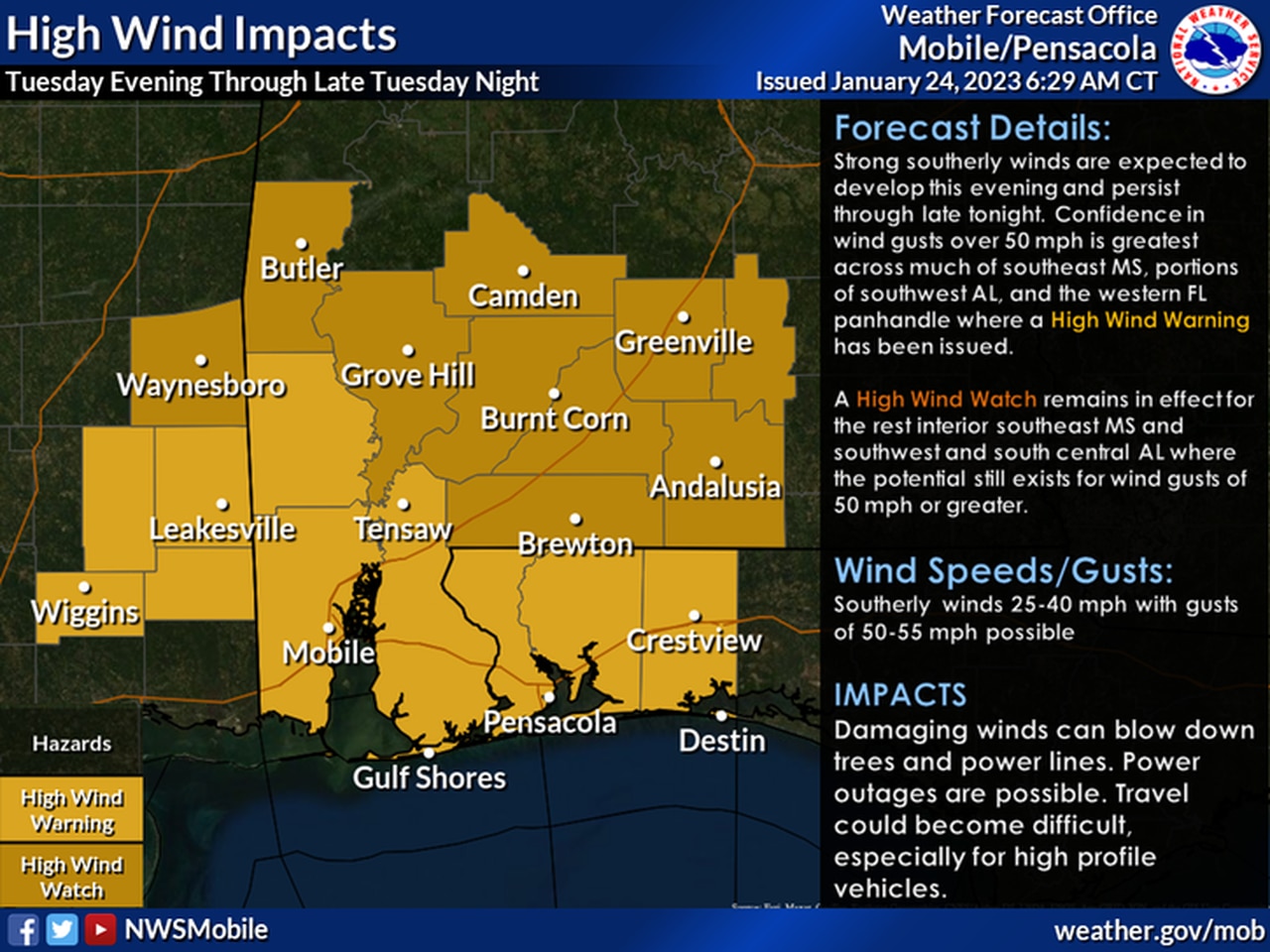 Parts of southern Alabama could face the double whammy of severe storms and high winds later in the day, and a rarely used high wind warning has been issued for several counties.

Winds could blow up to 55 mph in parts of southwest Alabama, and the National Weather Service has warned that widespread power outages could be possible.

These winds could affect Alabama before severe storms arrive late this evening.

The weather service warned those in southern Alabama to make sure their phones were charged starting this afternoon and that they had not one but several ways to get severe weather warnings if they were issued tonight.

The high wind warning will go into effect at 6 p.m. Tuesday for Washington, Baldwin and Mobile counties.

Winds could be sustained from 30 to 40 mph with gusts up to 55 mph in the warning zone, according to the weather service.

The rest of southwest Alabama, including Choctaw, Clarke, Wilcox, Monroe, Conecuh, Butler, Crenshaw, Escambia and Covington counties will be under high wind watch. The Mobile Weather Service said it had never issued a high wind watch before.

The weather service said areas of the high wind watch could experience winds of 20 to 30 mph with gusts of up to 50 mph.

This is an asterisk by the strong wind watch, however.

“There remains some uncertainty about the strength of the winds through the strong wind watch,” the weather service said. “We will be watching the trends closely today and the watch will either change to a wind advisory or upgrade to a strong wind warning depending on the trends.”

What could happen with such strong winds? The weather service said “damaging winds will bring down trees and power lines. Widespread power cuts are expected. Travel will be difficult, especially for large vehicles.

The Mobile Weather Service also issued a rare storm warning for offshore coastal waters. The weather service said sustained winds of 30 to 40 knots with gusts of up to 50 knots would be possible. Seas of 6 to 11 feet will be possible.

Forecasters expect the winds to really pick up today ahead of a storm system coming in from the west.

This storm system will bring a cold front across Alabama later tonight, and storms ahead of this front could be very intense. A few strong tornadoes will also be possible, forecasters said.

Falling trees can be deadly during a windstorm. The weather service said people should avoid being outdoors in wooded areas and around trees and branches. Forecasters said that if possible, stay on the lowest level of your home during a windstorm, as you would during severe thunderstorms or tornadoes.

Also be sure to secure outdoor objects such as trampolines or trash cans.

Gusty winds will be possible across the state of Alabama today. The rest of the state will be subject to wind advisories beginning at varying times this afternoon.

National Weather Service forecasters in Huntsville said Tuesday morning that a severe wind warning was not out of the question for parts of northern Alabama, and forecasters will be watching trends closely today.

Forecasters expect winds to begin to weaken on Wednesday.