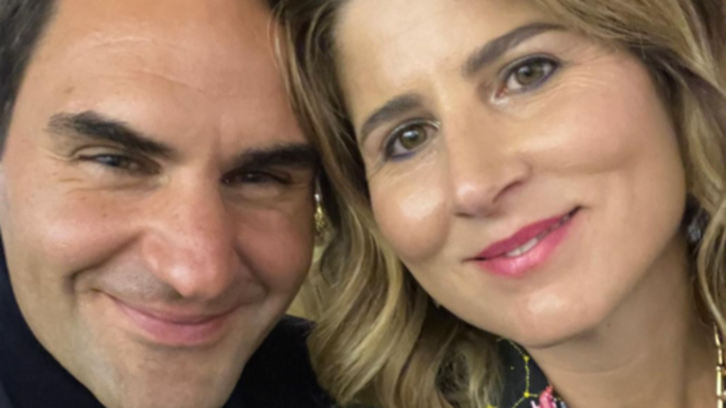 Tennis great Roger Federer leads a glamorous life after retiring from the sport.

He and his wife Mirka were spotted at Paris Fashion Week, attending the Christian Dior Haute Couture show on January 23.

Stream the world’s best reality, entertainment and true crime shows for free on 7Bravo on 7plus >>

Posing with the likes of Vogue editor Anna Wintour and Australian filmmaker Baz Luhrmann, Federer looked dapper in a dark suit and turtleneck.

But it was his wife Mirka whose outfit really got people talking.

Mirka was dressed in a patterned top and shorts, paired with a black vest that featured a blue goat on the front.

For those not in the know, “GOAT” is an acronym for “Greatest of all Time”.

Although many believe that Federer is the GOAT of tennis, with 20 Grand Slam victories, Rafael Nadal actually holds the title, with 22.

However, that should be in question if Novak Djokovic, who currently has 21 Grand Slams under his belt, qualifies for – and wins – the Australian Open final on January 29.

Was she sending a subtle message through her choice of dress for the event?

“She knows,” Eurosport announced on Twitter, sharing an image of Roger and Mirka.

“Mirka shows us who the GOAT is,” another noted.

“Can we talk about the fact that she has a GOAT next to her and a goat on her sweater?” one person tweeted.

“Did you spot her top lol,” said another.

Others have pointed out that Mirka is actually an Aries and that the image is more likely to represent an Aries ram.

“Mirka is Aries, that’s her zodiac sign, not a goat,” one fan observed.

“If you look closely at his clothes, there are other zodiac signs.”

Whatever the interpretation, it certainly seems like the couple are having the best life after Federer’s retirement.

They were also spotted at the Chanel couture show the next day, where they again sat front row with Wintour, Luhrmann and his wife Catherine Martin.

Kate Hudson’s exercise range mocked for X-rated design: ‘I have a lot of questions’