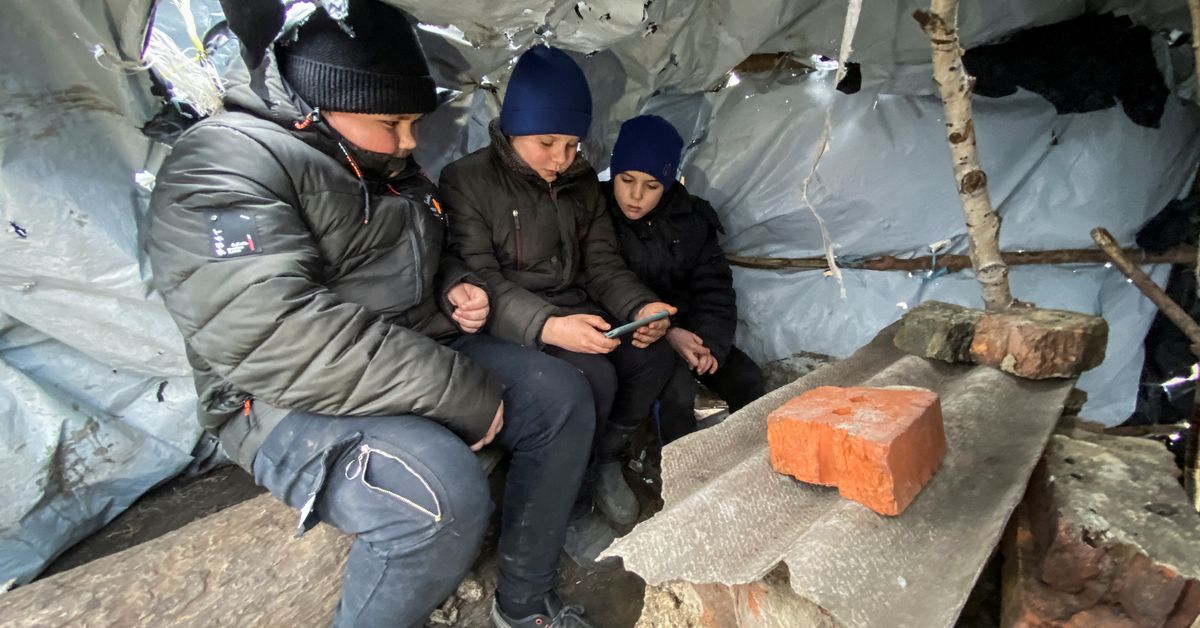 On the only hill with a mobile signal, Ukrainian children build a makeshift classroom

HONTARIVKA, Ukraine, Jan 24 (Reuters) – At the only place in their village where they could find a strong mobile internet signal – a windswept hill on the arid steppe – Ukrainian fifth-grade student Mykola Dziuba and his friends builds a makeshift tent to serve as a remote class.

“We sit here for about two or three hours, sometimes just an hour,” Dziuba said as the wind shook the rickety structure. “When it got cold recently, it wasn’t too great.”

The school in Dziuba, in eastern Ukraine, has been in distance learning mode since the start of the school year in September, a few weeks before the area was retaken from Russian occupation during a counter- Ukrainian offensive. This prompted him and his friends to seek out their own learning spaces.

He said they collected the materials – plastic sheeting, wooden poles, bricks and sand – around their homes.

In the shade of a water tower on a small hill, they discovered that the mobile coverage was sufficient for a stable internet connection. The ragged tent they built soon attracted more of their classmates.

“Everyone was sitting there talking, the teacher was showing us things,” Dziuba said. “We have done a lot.”

Students listen to lessons and send assignments to their teacher through messaging apps.

The school’s headmistress, Liudmyla Myronenko, said she didn’t expect her students to approach their distance studies with such enthusiasm.

“I was really in awe of the kids,” she said. “They wanted to see us, they wanted to communicate with us somehow.”

Russia invaded Ukraine 11 months ago, sparking a conflict that has killed thousands and ravaged swaths of territory, particularly in southern and eastern Ukraine.