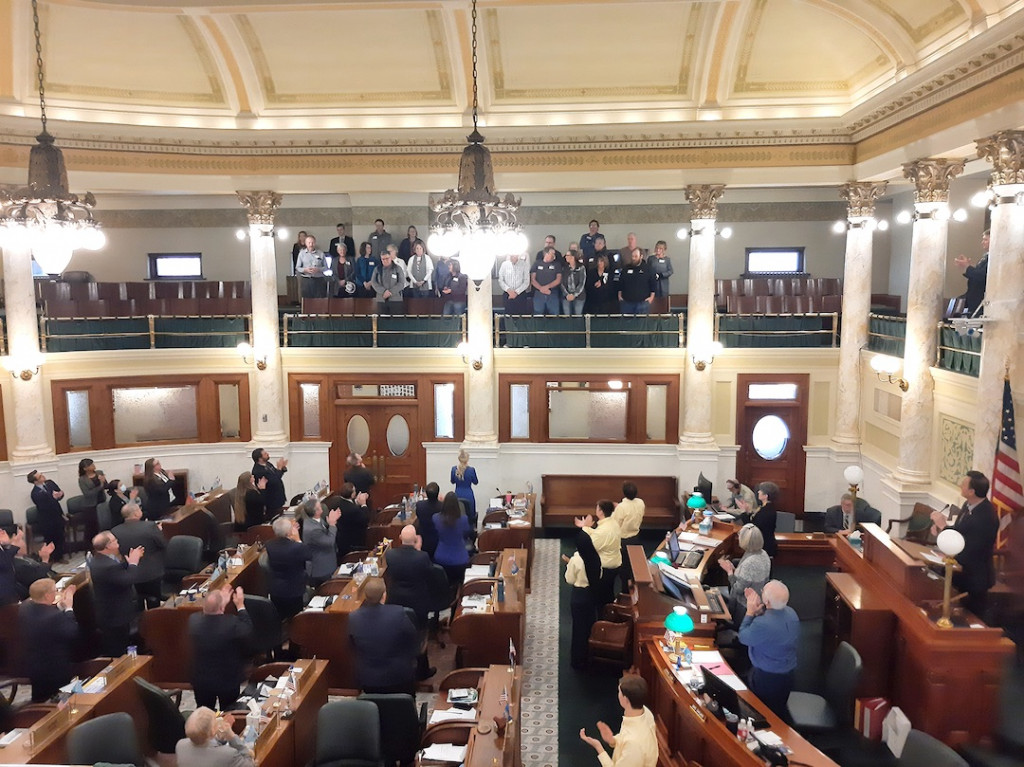 Moody County Company | The fight against the pipeline intensifies in Pierre

As plans for two carbon capture pipelines progress in South Dakota, including one that would be built in Moody County, the companies and their opponents are turning to Pierre.
Last week, at least two Moody County residents were among those pushing for eminent domain reform. Clayton Rentschler and Dan Janssen spent last Wednesday meeting with lawmakers and lobbying to clarify current state laws. Both are part of the Landowners for Eminent Domain Reform (LEDR) group.
Why they think it’s necessary — the companies proposing the pipelines, Summit and Navigator C02 (Heartland Greenway), the latter being the line that would pass locally, said that if landowners do not accept the route of the pipeline on their properties through sign agreements with the companies, they can still proceed with construction. And do it through the use of an eminent domain.
Generally, in South Dakota, eminent domain only gives the government the power to take your property. In fact, in 2006, a law was passed in South Dakota regarding eminent domain that was held up as an example by the Institute for Justice. At that time, IJ senior counsel Dana Berliner said, “Because lawmakers passed a broad restriction on the use of eminent domain for private development, and did so without any loophole or exception, every home, business and ranch in the Mount Rushmore State should finally be safe from the government’s wrecking ball.
Further reforms are apparently needed, opponents of the pipeline say.
HB 1084 was introduced last week to fix the problem and simply add the words “for public use” to the existing eminent domain rights language. The bill had not been scheduled for a hearing at the time of this printing, but has been referred to the House State Affairs Committee.
Meanwhile, as concerned citizens approach state lawmakers, so do at least a dozen lobbyists hired by Summit and one (at press time) by Navigator, as their permit applications remain before the Public Utilities Commission. Navigator’s hearings before the PUC, which are open to the public, are scheduled for this June. Summit hearings are currently scheduled for the fall.
For those unfamiliar with carbon capture and why there may be a fight over pipelines, the companies say their technology will reduce the carbon footprint of ethanol plants by permanently removing C02 from the atmosphere. The federal government recently provided billions in tax incentives to companies that could continue building the infrastructure, through the Cut Inflation Act in 2022. Section 45Q discusses the tax credit federal government on carbon capture for those who want to know more.
Others argue that the technology is fraudulent and dangerous at best.
There’s a lot of money at stake no matter what.
Zoning laws are being revised locally to better protect Moody County residents and area property owners. More local governments are discussing the issue and considering the potential impact if the pipeline is approved (see Flandreau City Council meeting this week). Public meetings also continue to be held to offer information and provide an opportunity to ask questions.
As the process moves forward, this is an issue that Moody County Enterprise will continue to cover.