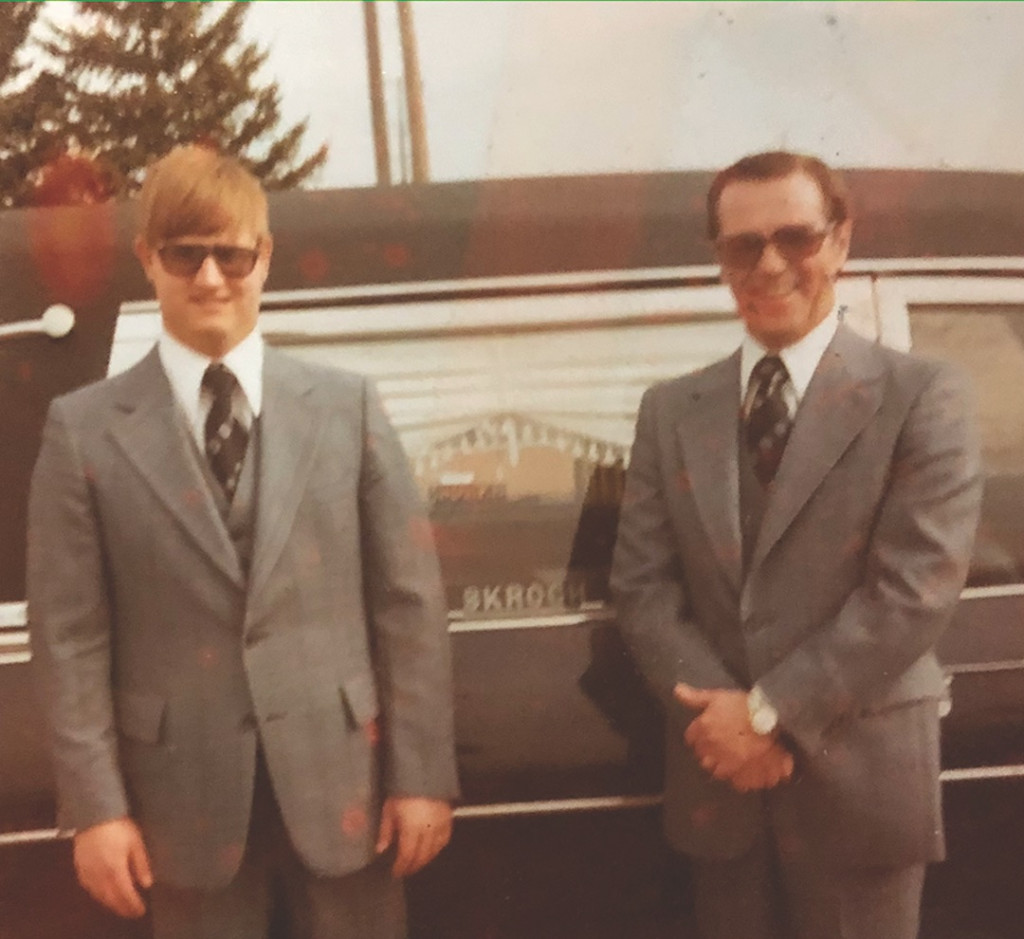 If you’ve lived in the greater Moody County area for over a year, chances are you’ve come across the professionalism of Mike and Jackie Skroch.
Whether to lay a loved one to rest or to pay their respects to another family, most people have visited one of the three Skroch Burial Chapel sites. Skroch’s has been a Moody County institution for 72 years. And from those years, Mike has played a role for more than 50 of them.
Earlier this month, the Skrochs announced the sale of their three funeral homes to Pioneer Enterprises. Locally they will be managed by Cole and Jessica Wingen. (see related story below)
Pioneer Enterprises, which also owns Eidsness and Rude’s Funeral Homes in Brookings, has no plans to change the very familiar Skroch name.
Although they have left the company, Mike and Jackie’s compassion and consideration will not soon be forgotten. They have touched countless families, helping them come to terms with the fact that dying is simply a part of life; something that we will all experience.
They just seemed to make the process of losing a loved one a little easier for perhaps thousands of people.

family history
The Skroch family arrived in the region in 1950; perhaps via “a little divine intervention”.
Mike’s parents, Roy P. and Mary Skroch, originally from Jamestown, ND, lived in Redfield. Roy had accepted a long-term vacancy as funeral director there while the owners were on vacation for a year. The local priest asked Roy to drive him to Sioux Falls one day. When they got to the corner of Route 77 and the ‘Flandreau’ sign was pointing east, the priest asked Roy to drive him there so he could visit his friend Father Kelly at the SS Simon and Jude.
During the visit, Father Kelly mentioned to Roy that the three-generation Davis Funeral Home in town was for sale and that he should consider buying it.
Mike says Roy told the priest he didn’t even own a car let alone money to buy a funeral home, so thanks to Father Kelly’s determination and his $1,000 loan, a new business era was born.
Roy P., Mary and their young daughter Terry moved to Flandreau in October 1950 and started their business.
Mary K. arrived shortly after the move, and in December 1951 Mike was born. Three more children would come, Pat, Jim and Joe, one after the other.
At the time, Mary was a nurse and Mike said that if her father had 20 funerals a year that was a lot, meaning they relied on Mary’s nursing income to help feed the family.
Also at this time, local funeral homes were in charge of ambulance services and Mike says his parents answered many calls at all hours of the day and night to help pay the bills.
“Roy was a medical officer in the navy and with mum being a registered nurse, their knowledge in the ambulance service was invaluable to the community.”

Mike
At an age when most boys thought primarily of cars, fishing, or girls, Mike took an interest in his father’s business and began working with Roy.
“I guess around 14-16 I started helping dad,” he said, performing various tasks such as lifting, moving and helping with funeral services. This eventually led to more and more and Mike decided he wanted to follow in his father’s footsteps and serve the community.
“I never really wanted to do anything else,” he said, although he tried.
After graduating from Flandreau High in 1970, he attended South Dakota State University for two years and enrolled in the pharmacy program.
“During one college summer, some buddies and I helped build bridges over the Interstate north of Brookings,” he said.
“You know, my dad never really wanted me to be a funeral director,” he said, “but after working those bridges, I KNEW I didn’t want to do THIS for a living. !”

Jackie
Jackie moved to town in 1960 when her parents, Dale and Mert Olson, bought the Coast-to-Coast store.
She married Mike in February 1974, and they headed west that fall to attend the California College of Mortuary Science in Los Angeles for a year. (Mike would then complete his one-year apprenticeship at Welter’s Funeral Home in Huron in 1975.)
When he left for California, Mike recalled his father saying “if Mike was so serious about going to mortuary school, he better make sure there was a job for him when he would have finished”.
That same fall Roy started the Elkton Chapel and after completing his stay in Huron, Mike and Jackie moved to Elkton to minister to families there.
They got involved in many community affairs there.
“Elkton is a great place to live,” said Jackie.
“We were at Jaycees and Jaycettes, the Community Club and coffee clubs,” she added.
As business grew, Mike and Jackie returned to their hometown in 1977, bought a house a block from the business, and began raising their three children.
One summer, Mike learned that there was a need in Elkton.
“Elkton needed a band for one of their parades,” he noted. “I told them, ‘I can find old friends from high school who will come and protest.’
And the Flandreau Alumni Band was born. They were very active in their younger years, traveling around the greater region, but now, like fine wine, the group mainly comes out for special occasions such as Flandreau All-School meetings.
The addition of the Colman Chapel took place in 1979. Ellis Thomas, who owned the other Flandreau Funeral Service at the time, retired and the Skrochs purchased his interests which meant the addition of the house Thomas-French funeral in Colman. (Thomas had bought the French funeral home in the 1960s.)
Jackie, who attended Nettleton College, did not always work in the chapel; she was employed as a medical assistant at the Flandreau Clinic and performed insurance claims for the Santee Sioux Tribe Indian Health Services for many years.

Together
In 1992, she began helping in the chapel with clerical work – writing and typing service records and filing paperwork.
And after the deaths of Roy P. and Mary – both on January 4, two years apart, 1994 and 1996 – his workload increased.
Over the years, funerals have changed.
“We used to run tours from 1 to 9 p.m. for two or three days,” says Jackie. “It must have been a long, drawn out time for these families.”
Mike added that he spends a lot of time finding “nice” cars with drivers to bring family members and pallbearers to the cemetery.
“Now everyone drives themselves.”
During those years, the couple appreciated their part-time employees who came to help when funeral times may overlap on the same day. Some helped with services while others were in the office answering the phone or being there for a visit.
They also had many funeral directors employed and living above the chapel. But for a year, only the two have been working full time.
And as for the early years of ambulance services, these ceased in the mid-1970s when the current Moody County Ambulance was established.
“I was very lucky that I didn’t do that,” Mike said, referring to 24-hour ambulance calls in the event of an accident.
But he has had a tough time at some of the 80 to 90 funerals a year over the past 47 years.
He too mourned by burying his family, his classmates, his friends.
“Oh, it’s a slam dunk…definitely,” he said.
“Children’s funerals are the most difficult. For the first 20 plus years, Roy took care of the younger ones.
The good times outweigh those he saw many families at what may be the saddest time of their lives, but yet “they stay strong and are the ones who are compassionate and wonderful to be around,” said Mike.
Jackie added that as she sat at the desk during visitation and prayer services, she heard many conversations and good stories with laughter, proving that even in a sad time people can find joy and tell heartfelt stories about the deceased.
“They may be at their worst, but celebrate all the good that person has done in their lifetime,” she said.

Look forward
What are they going to do now? The Skrochs say they can travel a little, they will enjoy their family and they will be able to see more activities from their seven grandchildren.
Their family includes daughter Natalie Schmidt and her husband Ricco and their children Steven, Nathan and Mallorie; son Marty and son Emmett; and her daughter Maren McCleish and her husband Tim and their children Mackson, Monroe and Maisie.
They all live within 45 miles of Flandreau and Mike and Jackie plan to turn off their phones and see more music concerts, sports competitions and whatever else they can find to do with them.
Jackie will still be playing her alto clarinet with the Flandreau City Band during the summer months.
Mike noted that he had no hobbies, probably because his job required being near the phone all the time, never knowing when he would be interrupted.
“I’ve played golf a few times, but it’s hard to be good at something when you go out four times a year,” he joked.
“We will be at the lake. Everyone loves the lake,” he said.
Mike will help new owners familiarize themselves with Flandreau, Colman and Elkton. He will also help with the Flandreau Cemetery records as there are no sextons at Union or Catholic cemeteries here.
As for the near future, if anyone needs to reach out to the couple, they can likely find them spending time at their Lake Campbell cabin with friends and family.
Don’t call, though. They may not answer the phone.

**Mark your calendars: Mike and Jackie’s family is hosting a retirement reception for them on Sunday, February 19 from 2-4 p.m. at Flandreau Chapel.