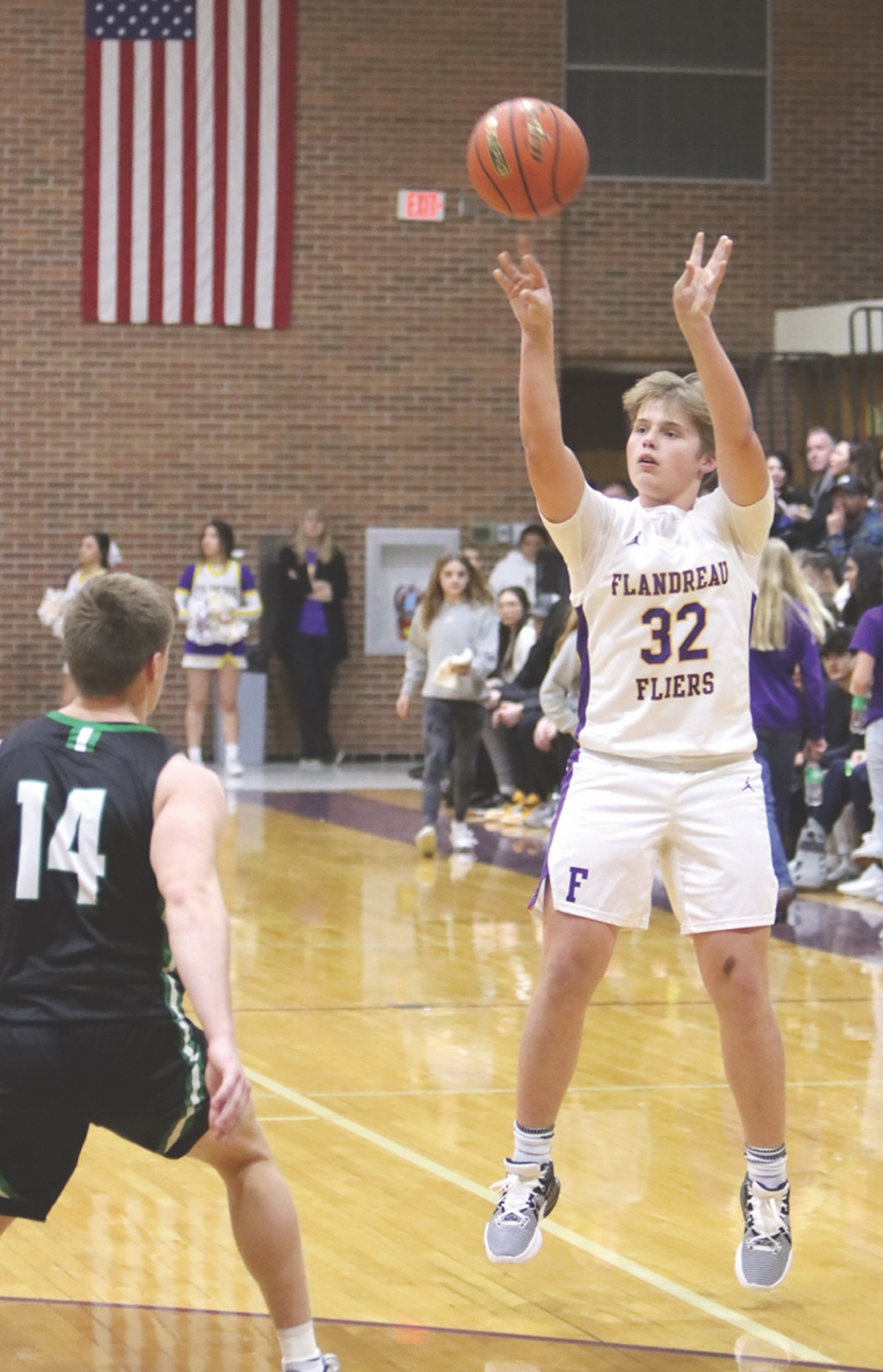 Flandreau’s basketball teams have had three doubleheaders over the past week playing Deuel on Tuesday, hosting McCook Central/Montrose on Friday and traveling for a one-day game at Parker on Saturday.
The Flier girls, now 7-4, swept all three opponents while the men’s team finished 1-2 and fell to 4-5 on the year.
This week, the girls host the first two nights of the Big East Conference tournament and will see a rematch with Parker in Thursday’s opener at around 7:30 p.m. Season passes are not honored for the conference tournament. The finals are Saturday in Volga.
The boys were due to be at Garretson on Tuesday night and then travel to Beresford on Thursday for a catch-up game with the Watchdogs.

GIRLS
Flandreau 61, Deuel 22
CLEAR LAKE – The Fliers dominated the first quarter and didn’t look back. They led 23-2 after the first and then took a 39-10 lead at halftime. Flandreau was leading 61-22 at the end of the third and they called off the game.
“It was a great team win against Deuel. It was fun to see a number of different girls hitting shots. Sadie Iott really got us going in the first quarter – scoring our defense and being aggressive in the half court.
Flandreau shot 46% from the field but only 40% from the charity strip. They swept 37 rebounds to Deuel’s 16 and had just five turnovers to Cardinal’s 18.
Claire Sheppard led the Fliers with 13 points and seven rebounds. Sadie Iott had 12 points and Lily Klein and Hannah Krull each had eight points. Both Klein and Iott had five rebounds.
The JV team won 39-21 behind the balanced score of Grace Krull with nine, Morgan Sheppard and Hannah Krull with seven each and six points from Josie Hamilton.

Flandreau 50, MC/M 32
FLANDREAU – The Flier girls were never threatened in the victory over MC/M. The score was tied three times in the first quarter but the Fliers never let the Cougars take the lead.
“We were really happy with the way we played against MCM,” said head coach Megan Severtson.
“There was a small difficult period in the second quarter, but thanks to a solid defensive effort in the second half, we were able to take a big lead and maintain it. I thought a number of girls played very well for us , but Sadie Iott’s play still stood out, providing a spark that our team nurtured for most of the 3rd and 4th quarters.
Iott finished with 18 points, seven rebounds and four steals to lead Flandreau. Claire Sheppard had 12 points. Lily Klein had 11 points and five rebounds.
The JV girls won, 29-21. Grace Krull scored 10 points and Addy Hammer had eight.

Flandreau 63, Parker 22
PARKER — The Fliers had no problem with the winless Pheasants on Saturday afternoon in a blowout of 41 points with a 51 field goal percentage with just seven turnovers to Parker’s 25.
Claire Sheppard hit for 17 points and Lizzie Pavlis had 14 points, nine rebounds, six steals and four assists. Sadie Iott had 14 blocks. Lily Klein had four interceptions and four assists.
The JV team also won their third match of the week in a 25-20 contest. Morgan Sheppard scored nine points and Ella Hoffman had seven.

BOYS
Deuel 56, Flandreau 43
CLEAR LAKE — The Cardinals had a strong second and third quarter and that turned out to be the difference Tuesday night. Both teams each scored seven points in the first quarter. Deuel then beat Flandreau 17-8 in the second quarter and would extend their lead to 40-25 at the end of the third. The Fliers won the fourth quarter by two points, but it wasn’t enough.
“We faced a Deuel team made up of seniors,” coach Brendan Sheppard said.
“We had some expensive turnovers which gave them easy points.”
Flandreau was led by Paul Parsley who had 13 points and four assists. Luke Sheppard had 12 points, six rebounds and four assists and Alfie Henderson had 12 points.
Deuel was led by Dravyn Carson who had 16 points. Gavin Benck had 14 points and Braydon Simon had 10 points.
In double overtime, the Cardinals outlasted the Fliers in the JV game, 55-48. Jon Schrader led the Fliers with 15 points and Kody Kneebone added 11.
Team C also fell to Deuel, 37-32. Jon Burshiem scored 11 and Kaden Burshiem scored seven.

MC/M 48, Flandreau 45
FLANDREAU — A last-second lift from half court lifted the McCook Central/Montrose Fighting Cougars over the Fliers last Friday night.
Entering the fourth quarter, the Fliers led by eight points, but the Cougars had seven unanswered points to close the lead. From then on, the lead was back and forth until Xavier Bien hit a long ball to give the Fliers a 47-45 lead.
Second-year Cougar Mason Sabers in front of the scorer’s table threw a buzzer and banked it for the visiting team to win, 48-47.
“We played well, but we got injured in a lot of areas that could have made the difference,” Sheppard said.
“Second-half turnovers led to transitional layups and going 6 of 15 from the free-throw line as a team didn’t help.”
Parsley topped Flier’s scoring with 15 points and also had seven rebounds. Henderson scored 11 points and Sheppard had eight points and six rebounds.
Flandreau won the JV contest, 41-28 with Micah Otto scoring 14 and Kaden Burshiem eight.

Flandreau 50, Parker 40
PARKER — The Fliers were trailed again by Parsley as he dropped 15 points in the 50-40 win over the Pheasants.
“I finished a busy week with a win at Parker,” Sheppard said.
“It’s fun to see the team progressing and making some great passes. We had a couple of misses in the final minutes which made it closer.
Parsley also had eight rebounds and five assists, and Sheppard tied for 13 points, 10 boards and four steals.
Henderson scored 12 points for the Fliers.
“We showed great energy and excitement on the defensive side led by Tanner Reed and Jon Schrader.”
Team JV stopped the Pheasants, 38-21 behind 11 points from Schrader and eight from Kneebone while Team C also won, 34-20. Jadon Eng scored eight points and Kaden Burshiem seven points.