This afternoon in Georgia, Fulton County District Attorney Fani Willis argued that the grand jury’s special report into interference in the 2020 presidential election should remain sealed pending his indictment. “imminent”.

First Amendment attorney Tom Clyde, representing media stakeholders, argued that there is a strong presumption in favor of public legal process and pointed to a provision of a Georgia law that appears to make publication un discretionary for the court.

And supervising judge Robert McBurney looked no less confused at the end of the hearing than when he took the bench at noon.

The only thing that is clear is that Georgia’s special purpose grand jury law is a hot mess. Check out Lawfare for Anna Bower’s terrific article outlining the relevant law and precedents.

The DA called jurors in May and successfully argued subpoenas to compel testimony from numerous frontline players in Donald Trump’s plan to steal the state’s 16 electoral votes from President Joe Biden. Senator Lindsey Graham and former White House chief of staff Mark Meadows were ordered to testify, as were attorneys Rudy Giuliani, Jenna Ellis, Cleta Mitchell, Georgian Secretary of State Brad Raffensperger and several attendees at the conspiracy of false voters. But because the special purpose grand jury cannot present an indictment, Texas courts ruled that these were not criminal subpoenas and declined to apply them to attorneys Sidney Powell and Jackie Pick.

The grand jury can only produce a report, which it did in early January, voting to make its findings public. Judge McBurney dissolved the body in an order dated January 9 in which he asked the question of what to do next and put the case to hearing today:

Unsurprisingly, prosecutors would prefer not to release the report while they are still trying to decide who, if anything, to charge. DA Willis herself gave a brief opening statement in which she promised that charging decisions were “imminent”. His deputy, Donald Wakeford, continued with a lengthy discussion of witness protection and the prosecution process.

To which the court responded that the congressional hearings into the Jan. 6 Capitol riot and the release of its final report do not appear to have hampered the Justice Department’s investigation. (Attorney General Garland might have a slightly different view on this one.) The judge also noted that he should issue a gag order on the jurors themselves, because nothing in the law binds them to secrecy.

Appearing for media speakers, which included more or less every media outlet in the country, Clyde argued that there is a presumption that all court proceedings should be public, and pointed to the word “shall” in the law. He also agreed to appeal to the Supreme Court of Georgia, instead of rolling the dice at the Eleventh Circuit.

In the end, Justice McBurney seemed aware that delaying his decision might just avoid having to take it all in. The district attorney admitted the report will become public — and soon, since she is set to make a charging decision. And once the report is published, the media argument is either moot or limited to the issue of redactions. But if Judge McBurney beats DA Willis to the fist, he will give him time to seek redress – the order and publication will not be simultaneous.

Meanwhile, on Truth Social, Donald Trump seems to be taking it all in stride: 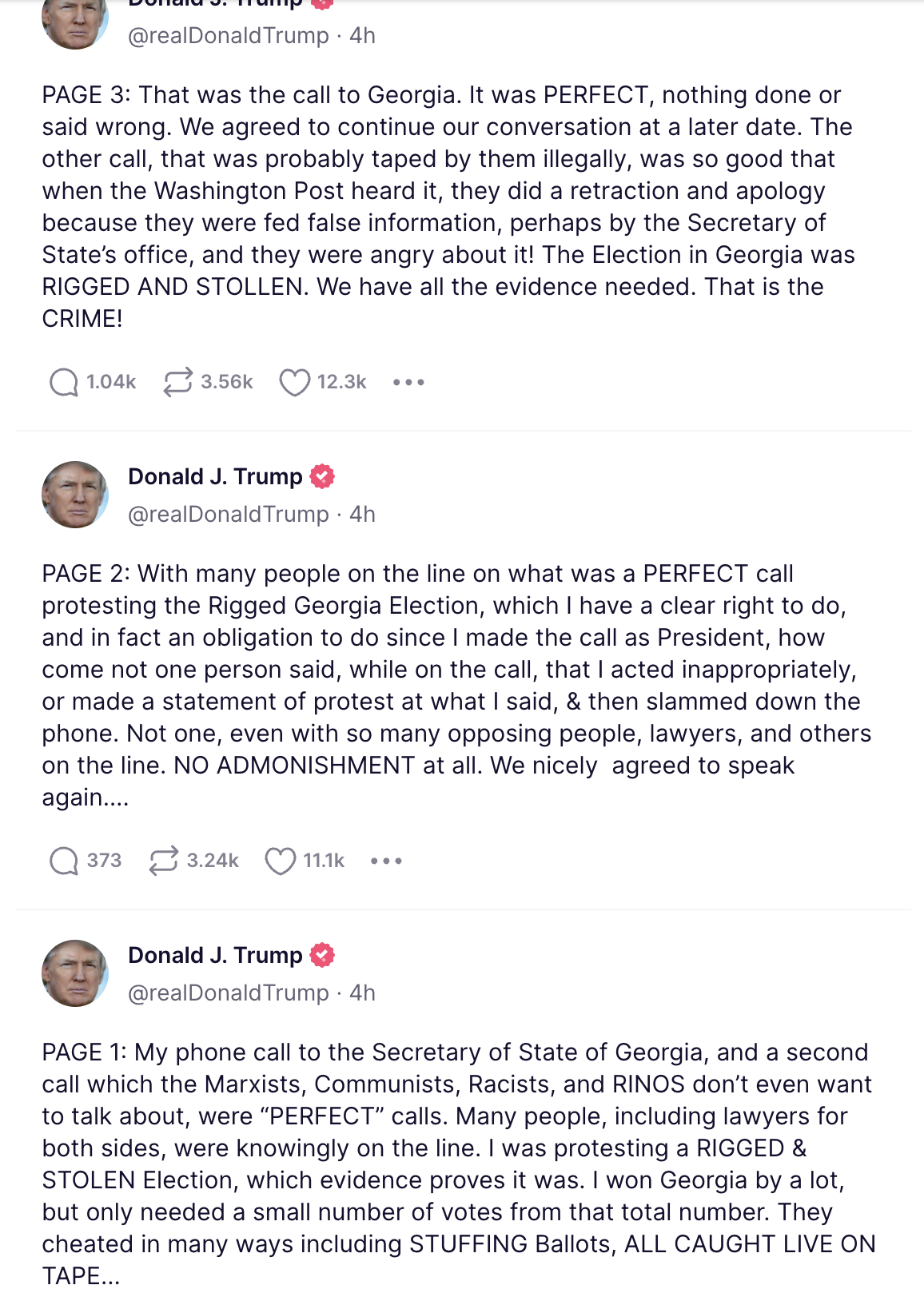 Mmmmm, the nails. And if we take advantage of it before February, it won’t even be stale.

Dye Liz lives in Baltimore where she writes on law and politics.