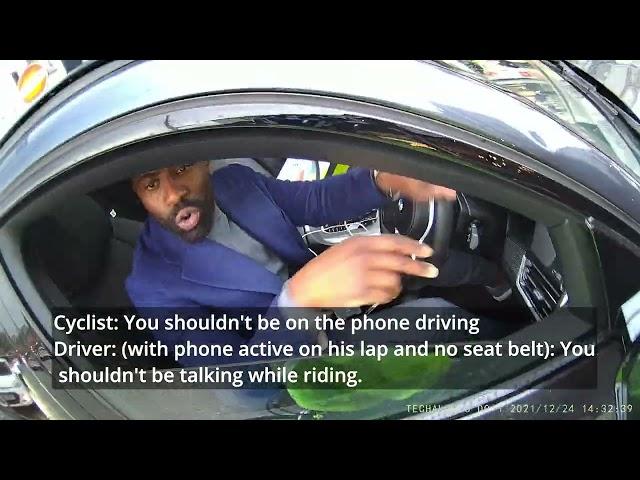 A cyclist has recalled the shocking road rage incident which saw him assaulted after questioning a driver’s mobile phone use while driving.

The rider, who will remain anonymous throughout this article, told road.cc he has still not received the £500 compensation a Westminster Magistrates’ Court judge ordered Akil James to pay, along with a £2,000 fine and £820 costs in addition to five. penalty points on his driver’s license.

“What worries me most is that this dangerous driver remains a threat to other road users,” the cyclist, whose bike suffered damage worth £450 during the crash, told us. incident on King’s Road, Chelsea, on Christmas Eve 2021.

The cyclist was returning from volunteering for disadvantaged young people in west London when James pulled out in front of him, blocking the road.

> Here’s what to do if you’re filming a near miss, close quarters or collision while riding a bike

“I could see the driver had a phone stuck to his left ear and was talking into it and not wearing his seatbelt,” the biker said. “I asked the driver ‘Why are you on the phone?’ The phone screen was clearly on during an active call.

“He told me to ‘f*** off’ and I responded with a ‘thank you’ and started riding the bike. I could see the driver turn his steering wheel to the right as I away.

“I could sense what was about to happen and prepared to take evasive action. A second or two later he accelerated hard, while shouting ‘get off the road’. The vehicle then swerved into collision with my leg and my bike.

“I told him ‘this is the second assault, I’m going to call the police, you just hit me’ as I picked up my bike from the ground. He replied ‘shut the fuck up the mug’ and sped up.

“The vehicle was held up at a zebra crossing with pedestrians crossing. I limped my damaged bike onto the curb and approached the BMW from the passenger side to tell the driver I would report it.

> Best bike cameras – capture your ride and relive it later

“He continued to hold his phone in his left hand during a phone call as a pedestrian crossed the zebra crossing. Obviously angry, he didn’t give in and narrowly missed her, accelerating at great speed.”

The runner told us he was “blown away by the friendliness” of passers-by who checked on him and provided witness statements.

“As I said, it happened on Christmas Eve. This incident really destroyed my Christmas family because I was in a very stressed state and I couldn’t help but replay in my head what happened. had passed,” they continued.

“I was lucky that the bruising to my leg was minimal as I had managed to jump off my bike when the collision happened with the brakes, totaling £450 in repairs.

“A damage report by the amazing guys at CycleWorks Kennington was submitted to the police but not to court. I had to report it myself in court to the magistrate in order to get compensation.”

After providing a statement online to the Metropolitan Police, the cyclist was then asked to provide a statement in person at Hammersmith Police Station and, in April 2022, received a “generic letter” advising “after careful consideration that ‘it has been decided that no further action will be taken’.

“I couldn’t believe this decision had been made. I contacted the investigator who said this letter was from the Met Police traffic unit but he was still being chased by another department for common assault and conduct without care or consideration,” our reader explained.

“I thought the video evidence I provided was compelling: Violations I can see include using a phone while driving, not wearing a seatbelt, dangerous driving, not stopping after an accident and violation of the zebra crossing.I have no idea why they decided that these offenses were not worth prosecuting.

“I wanted to claim against his insurance to fix my bike but had to take legal advice to get the police to release the details of the driver’s insurance as the vehicle was a company car and had multiple policies against it. I eventually found out that the driver was insured with ERS and sent them various emails but got no response [a silence repeated to road.cc’s request for comment].”

In the meantime, our reader has visited Westminster Magistrate’s Court twice, once in July and then again in September 2022, but both times James failed to show up.

“To avoid wasting everyone’s time again, the magistrate gave instructions for me to testify without the presence of the driver,” he continued. “The driver’s hearing finally took place in November where he pleaded guilty to the charges [below].”

James was convicted, with the judge taking into account the guilty plea, and given five penalty points on his driving licence, a £2,000 fine, £620 in prosecution costs (recovery order made), a £200 victim surcharge and £500 cyclist compensation (still uncollected).

“The driver still hasn’t paid a penny in compensation,” our reader told us. “I emailed his insurance again in the vague hope of being paid for the repairs.

“What worries me most is that this dangerous driver remains a threat to other road users. I don’t post on social media, but I hope this story shows how some of our legal procedures are inadequate and that the rights of motorists are put above the safety of cyclists.”