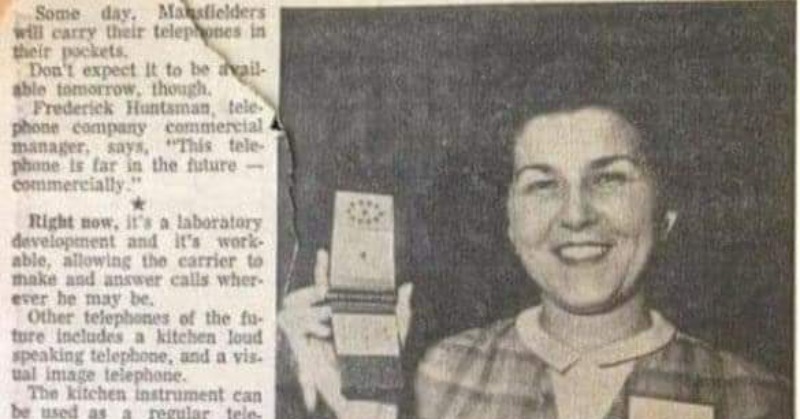 A 1963 news article predicted the future of mobile phones

Today, many of us cannot imagine our lives without our smartphones. We use our phones not only to make calls and send messages, but also to carry a variety of other essentials, place orders, the list goes on.

It seemed like a distant fantasy when cell phones were still in development. A Mansfield News Journal article from 1963 recently went viral on the internet, revealing how people viewed smartphones at the time.

A woman in 1963 eerily predicts the rise of 21st century fascism. pic.twitter.com/O3ZOqInviP

According to the post, an article published in a newspaper in 1963 claimed that individuals around the world may in the future carry cell phones in their pockets. The article, titled “You’ll be able to carry your phone in your pocket in the future,” also featured a representative image of a mobile device worn by a woman that looks exactly like a modern flip phone.

The viral newspaper article was published on April 18, 1963 in the Mansfield, Ohio New Journal. The post advised readers not to anticipate the technology’s upcoming release as it was still in the lab, according to the report. The newspaper article which is making the rounds on the internet was shared on the History in Pictures Twitter feed.

“One day, Mainfielders will carry their phones in their pockets,” according to the report. “However, don’t expect it to be accessible tomorrow. It’s currently a lab development, but it’s functional, allowing the carrier to make and answer calls wherever they are.”

For those unaware, cell phones only became commercially available in the 1980s, decades after the newspaper article was published.

Initially, Nikola Tesla was one of the main pioneers who predicted that people around the world could quickly connect with each other through technology that would easily slip into a vest pocket.

The viral newspaper article also claimed that the devices would activate features such as loudspeakers, so that even if someone is engaged in some action, they will be able to chat via a speaker phone.

“Other phones of the future include a speakerphone kitchen phone and a visual picture phone. The kitchen instrument can be used as a regular telephone, a speakerphone if the housewife is busy preparing a meal, or an intercom station for the home,” reads the press clipping. .

The article also foresaw the video calling trend, predicting that individuals will be able to watch other parties speak through a small television camera. The technology was known as the “TV phone” at the time.

“A small television camera sends the image while a microphone and speaker allow participants to interact.” Additionally, texting has been suggested: “The ‘TV phone’ will also include a writer’s signature transmission system and a conversation recorder.”

What do you think about this? Tell us in the comments.